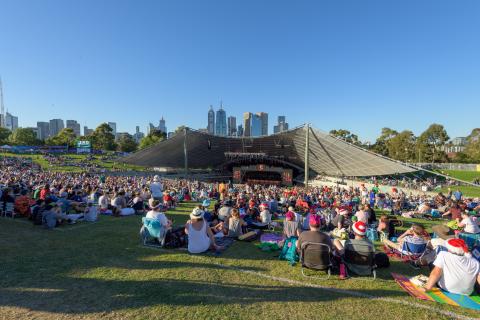 It’s that time of the year again, Vision Australia’s Carols by Candlelight is back! An annual Christmas concert and fundraiser for Vision Australia's children's services held on Christmas Eve at the Sidney Myer Music Bowl in Melbourne, 10,000 people attend each year to celebrate the magic of Christmas.

Carols by Candlelight has been an iconic Melbourne event since 1938, and is broadcast live on Channel 9, 3AW in Melbourne and across the country on Vision Australia Radio, bringing together families all over the country in the spirit of goodwill and generosity.

This year the audio described version of Carols by Candlelight is streamed online and broadcast live across the Vision Australia Radio Network, but did you know it’s also available for those attending at the Sidney Myer Music Bowl?

Through an additional narration track, Audio Description succinctly paints an image of transitions, movements and gestures, neatly woven between on stage dialogue, allowing people who are blind or have low vision to enjoy this spectacular event on a level footing with their sighted peers.

If you would like to register your interest in using our audio description service at this year’s event please visit carols.visionaustralia.org/accessibility or call 1300 84 74 66.

Those not heading along to the Bowl on the lawns and gardens of Kings Domain will be able to listen to the Carols on Vision Australia Radio complete with our own commentary and the full event audio described.

It’s the perfect alternative to the broadcast on TV or, for those who are watching the event on the big screen they will be able to listen along to our own coverage via their local Vision Australia Radio AM/FM service or on VAR Digital (DAB+).

This year, in addition to the event being broadcast on radio itself, we will be bringing you interviews, news and highlights from years gone by, in the weeks leading up to Christmas Eve. Keep listening to Vision Australia Radio for more information and of course our radio news section at varadio.org. A beloved Australian tradition, Vision Australia’s Carols by Candlelight has a remarkable history of supporting children who are blind or have low vision, and this year marks the 81st anniversary for the iconic Christmas celebration.

Banks, a veteran of radio, was walking home on Christmas Eve in 1937 when he noticed an elderly woman sitting up in bed by her window, her face lit only by a candle. She had a radio beside her and was singing along to the Christmas carol, ‘Away in a Manger’. It was at this moment that Banks was inspired to create a gathering of people to sing Carols by Candlelight.

It was not easy to gain general support for the idea, but thanks to the gracious personal interest of the Lord Mayor at the time, Cr. A.W. Coles, Norman Banks gained the approval of the City Council and set to work organising the whole program.

And so, in 1938, 10,000 people gathered at midnight in the Alexandra Gardens to sing carols with a 30-strong choir, two soloists and the Metropolitan Fire Brigade Band. The unusual candlelight setting, and the beauty of the carols, instantly won the affection of the large assembly. A new Christmas tradition was born. The candles lit in 1938 have burned through prosperous and troubled times.

Even with Australia in the grip of the Second World War, the candles continued to burn on Christmas Eve. Then came the Brown Out year when, although the Festival was scheduled to be presented at Alexandra Gardens, war-time restrictions and the threat of a Japanese invasion necessitated a transfer to the Baptist Church.

Australia’s Queen of Song, Gladys Moncrieff, appeared on the program in 1942, and throughout the early years, many famous artists have been associated with Carols by Candlelight, including Madame Florence Austral, Gilda Grauen and other prominent Victorian artists including Robert Simmons, Mary Miller, Robert Payne, William Laird and John Lanigan.

It was in 1942 that an international radio hook-up was arranged, and during the evening, messages were relayed to the audience from the Lord Mayors of London and New York.

From 1949, RVIB became the main beneficiary with the Austin Hospital. In the first year, it received 7,543 pounds earmarked for the new nursery and school on Burwood Road. In 1958, the venue was changed from Alexandra Gardens to the new Sidney Myer Music Bowl where over 100,000 people attended. Since 1965 all proceeds have gone to Vision Australia.

In 1970, Vision Australia's Carols by Candlelight was televised for the first time on Channel Ten. Channel 9 took over in 1979 and has continued to be a broadcast partner ever since.

And so, through the years, the festival has grown in Melbourne and captured the imagination of audiences throughout the world. It has been emulated in Australian cities and is now an annual feature in many countries.

Vision Australia’s Carols by Candlelight is not just about a wonderful show, it is also about raising money to support services for children who are blind or have low vision. Tune in to learn how you can do your bit. Keep listening to Vision Australia Radio for ticket info and general event updates or visit varadio.org to listen online.